Published by Dharmandar Kumar on November 22, 2022

iOS app development is one of the most talked about topics these days as the demand for Apple apps has gone up, and there are very few companies to help you with perfect architecture. With an iOS app, one can get huge market growth and profits because of the strict checks one has to go through to get the app listed in the Apple App Store. While iOS only holds 26% of the market share compared to the android google play store, which holds a whopping 74%. It is not always the numbers or how many people are using a platform – sometimes it is more about the quality, and Apple has always been superior to its competitors.

Many have been studied by many, and it is always found that the Google play store has the most fakes and data-stealing apps. Time and again, it is always proved that releasing on the Apple Store is a matter of high esteem and builds a strong brand image in society. But, whichever you choose, there is always competition between other apps which have been well-established for a long time. However, when it comes to profit, Apple App stores take away the crown, and similarly, it is a costly affair to develop an iOS App, yet it is worth the price you will pay.

If you are planning to hire the best iOS app development company, then you are at the right spot, and let us start with the basics of why we will be your best choice.

What is iOS App Development?

It is a complex process of building, developing, and launching applications on the Apple operating system, which is one of the most sophisticated stores globally. Apple stores have apps for all of its devices, from watches, Macbooks, iPhones, and iPads to Mac Computers. Apple provides a huge bunch of tools and resources for creating apps for the store. Only a few platforms are used to develop the app, which are Objective C & Swift – since iOS apps use these languages only for the app development process.

With these extensive tools and libraries, iOS developers can easily create, launch and manage the apps. They constantly work with changes in the apps to make them optimized as per the guidelines given by Apple Store Managers. Since you have knowledge of the app’s workings and what is needed.

Why is iOS App Development needed?

As we go further, you and we should want to know why you need an iOS App Development when you can get the same app built on android and still reach many users. The fame of Apple when it connects it with your app can help you grow much faster and larger. It is always advised to have an app on the apple store and slowly go into android. For Android users, the apple store is a luxury, and once an iOS app comes to the Google Play store after the apple launch, it is taken with best regards and success. It happens because of the fame and goodwill created while your app was on the apple app store. Let us discuss why Swift is the most used app development language.

It Is Easy to Learn & Implement

It is said that Swift is one of the most used languages because it is easy to get a hold of, and the apps built on this are swiftly accepted by apple. It is one of the first and biggest reasons why everyone uses Swift to develop an apple app. Large companies like Google, Facebook, Slack, and many more have their apps using Swift, meaning this language has fewer code lines than any other language. Do you know- once we have built the app for you, it becomes easy to maintain and monitor because implementation files and Objective C files are integrated into the swift main file?

It Is Safe & Secure

The biggest advantage other than the above is its safety protocols. It is a memory and type-safe language, i.e., it does not allow type errors in its code. Thus, it helps prevent the code from vulnerabilities, which is one of the major issues these days that might crash the application. These are also called uninitialized pointers. There is an equilibrium between the Application Programming Interface (API) and Swift’s Application Binary Interface (ABI). Moreover, Swift gives the ability to talk to older ecosystems that are discontinued, and the new and old apps work in the same manner, giving huge accessibility to iPhone users and iOS app developers.

Swift is the easiest language to learn, and best-in-class security and accessibility have made it one of the most popular languages in the world of iOS. The efforts which are required to adopt and maintain are minimal. That is, the functions are re-integrated, reducing the ability of errors and crashes. The developers can, therefore, focus on building the app rather than thinking of its vulnerabilities and chances of getting the language obsolete. Apple provides an effective, efficient, and user-friendly language that will be directly posted in the most popular App Store. Once it is approved by Apple, it will reach millions of audiences, and the return on investment with a break-even point will come very soon.

How to choose an iPhone app development company?

This question has always haunted and overwhelmed customers because there are millions of companies, and what makes you choose us over any of the rest? Let us discuss a few of the reasons why you should choose Dipole Tech as an iPhone app development company. It is not enough to know the language’s basics to be effective; one should have the following technical skills to make the best iOS app:

Xcode IDE Knowledge: Developers can use Xcode language to build iOS apps which are universally accepted and are compatible with tvOS, macOS, iOS, and watchOS. Cocoa and its frameworks with Xcode the application can bring an exciting and delightful experience to the users.

Objective C & Swift – Language Mastery: Native iOS apps are clients’ most commonly required type, and many businesses use Objective C and Swift to develop the apps. iOS developers should always have complete knowledge of the syntax, statements, classes, and inheritance with initialization and interoperability with Objective C.

Familiarity with Apple Human Interface: Do you know there are some design guidelines which are followed while designing the UI/ UX of the application? Does your company team also know about it? If yes, then you are at the right spot. In order to have a highly responsive application, there are styling UI kits. These kits help integrate, design, and create custom forms and controls to improve the feel and look of the app. There is an auto layout add-on that the developer should know as it is needed to incorporate various elements in the codes.

An acquaintance of Realm and Core Data: Any application relies on robust database management, which helps you to know the overall existence and performance of the app. Storing, uploading, retrieving, and filtering data should be done effectively and efficiently. There are many generally used databases like SQLite, Realm, and Core Data that help developers to do the whole process.

After knowing a few factors, one needs to look at some of the ios app development costs. The development cost largely depends on the app type, like a native or hybrid, and the app’s complexity.

If you have any requirements to help you build an iOS app for your project, you can reach out to us at +1-917-675-5303 or contact@dipoletechi.com

FAQs
Do you provide regular updates during the iOS app development process?

Ans. Yes, we have the best after-sales services and we tend to keep you and your updated with the latest changes, and regular updates is a must.

How much does it cost to develop an iOS application?

Ans. The price depends on the technicalities and features you will need in the app. Let us discuss in a meeting.

Do I get complete Ownership of my app development in iOS, its code, and data after completion?

Ans. Yes, once the app launch is complete we will transfer all the source code with all the files to you. We discuss everything during the initiation process.

I want to keep my mobile iOS app idea confidential. Will you sign an NDA with me?

Ans. Yes, we will sign an NDA with you, we always want you to have the best of our services.

How does a mobile app design and development process work?

Ans. There are usually many stages but let us help you get a basic idea. We have divided these steps into a few stages: Product discussion, Idea Brainstorming, development process, alpha/ beta testing, app launch, app maintenance, and marketing through social media. 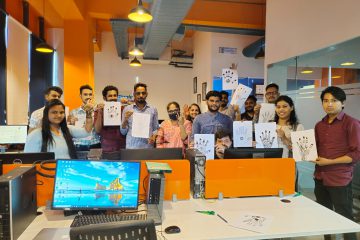